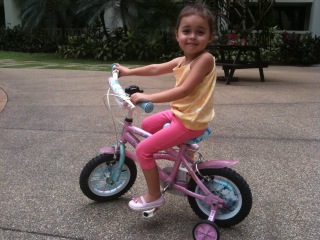 That same week, she also started riding her bicycle. We had bought her a bike a year ago as her 4th birthday present. Though genuinely excited, she could never figure out how to pedal. We got tired of pushing her on the bike and she soon lost interest. We weren’t sure whether she had such low muscle tone that she didn’t have the strength to push the pedal hard enough, or whether she wasn’t able to coordinate her limbs and senses to pedal or she was simply too young to ride. However, we knew many children younger than her who were able to pedal and ride a bike. After some time, the bike was kept forgotten collecting dust. Until she suddenly expressed an interest in the bike again. We dusted off the bike, Maya hopped on and started pedaling like she’s been doing it all her life.

Initially, we thought that it was a coincidence. That she was finally at the appropriate age to learn these new skills and physiologically old enough to master these skills. After all, I myself learnt to play the piano when I was 4 years old. But I had formal piano lessons then, whereas Maya did not. And it wasn’t as if we had been teaching Maya to pedal, we had forgotten we even had the bike.

That week was also coincidentally our first round of DMSA chelation. Yes, it was ironic that we started chelation AFTER Maya officially recovered from Autism. Throughout her biomedical journey, we had to prioritize her treatments based on her most pressing issues. So, finally we got to the point when we were ready for chelation. We had been doing the prep work prior to chelation the 2 months before, prepping her body by adjusting her mineral levels, testing for her current Red Blood Cells Minerals levels, testing for her kidney and liver function, Urine Prophyrins test for heavy metals body burden levels, then doing the pre and post challenge test to make sure that the dosage was right and that we got a good excretion rate. Once the results were back, everything looked good and our doctor gave us the green light for our first round of DMSA.

We saw the doctor a couple of weeks after we completed the first round of DMSA and he asked whether we saw any improvements in Maya. Paul and I explained that it was hard to tell if there was any because Maya was just remarkable all the time, every single day. We said that either there were either no improvements from it or any gains that were made was too small to notice. But we did mention about Maya’s piano playing and bike riding which occurred within the first few days of the DMSA round. Our doctor immediately said that it’s probably the chelation which has brought on this new burst of coordination in her gross and fine motor skills. But Paul and I said that it was just a coincidence.

We put his remarks aside, thinking that he was just searching for improvements when there was none to be had. After all, most parents only report improvements from chelation after several rounds, usually after 12 rounds. This was only our 1st round.

However, a conversation with a friend later that week changed my mind. I casually mentioned that we had just done our first round of DMSA. He had started chelation for his son a few weeks earlier. And I laughingly told him about how the doctor was pressing me for some sort of positive response to the chelation, even though it was too soon to tell. His next words stopped me cold- he said that his son started to ride the bicycle right after his first round of DMSA. He said that something just ‘clicked’ in his son and his coordination finally kicked in. Apparently, he had been trying to teach his son to ride the bicycle for ages before that, but he just couldn’t seem to grasp how to pedal. He is convinced that chelation was the catalyst.

I then told him about Maya’s piano playing and riding the bicycle. So, even after all these years, it was nice to be reminded again of how Biomed is helping us realize Maya’s full potential. Sorry we doubted you Doc.

We had only done 2 rounds when Maya experienced fierce Candida flare-up. As you know, yeast tends to flare-up during chelation. Maya started to exhibit Candida symptoms again and as she was due to start in a new kindergarten so we chose to postpone chelation for a while. We wanted to deal with the yeast first so that Maya could start school at her best. We have dealt with yeast many times, so yet another flare up doesn’t bring about the same anxiety and stress as it used to. A round of natural antifungals did the trick and we are now on to our 3rd round. We started chelation quite late by most standards, our methods still are slow and steady. But it has served us well.

Yesterday, I heard Maya singing a new song, it sounded very much like the first refrain from Rihanna and T.I.’s song Live Your Life. Maya was going “Maaa ya Hii, Maa ya ho, maaya hii, maaa ya ha aa”. I asked her what song she was singing and where she heard it. She said “I heard it on the radio” I have never played any of Rihanna’s music with Maya before, so I knew she didn’t pick it up from home. Then I asked her where did she hear the radio, she replied “At baby Rekha’s house”. Now I remember, we went to a birthday party at Rekha’s house 4 weeks back. They played pass the parcel and they played pop songs for it. And yes, Rihanna was playing that night. It was a fun and noisy party that went on until quite late. The music was blaring, there were many children and adults, lots of activity and mayhem. A year ago, we couldn’t even contemplate going to the party, the sensorial overload would have been too much for Maya to bear. Not only did she fully participate in all the games, she had lots of fun and didn’t even require Mum to accompany her. How far we have come.

Not only was I continuously amazed at Maya’s memory, she also has perfect pitch. Maya has never sang that song before to our knowledge since the party, neither has she heard it since. However only the night before she had her first DMSA dose for the 3rd round of chelation. She’s had her 2nd dose last night, let’s see what other nice surprises Maya has in store for us today. Am I grasping at coincidences? Maybe. But I am seeing wonderful improvements every day. We are looking forward to more piano recitals, impromptu arias and bicycle rides……