April is Autism Awareness Month. Though both my girls no longer have Autism, the lingering health implications on their immune system still plagues us to this day. April was an incredibly exhausting month for us. Both my girls had colds, flu and coughs intermittently throughout that month. And for 3 weeks, my eldest daughter May complained of extreme tummy pains, she threw up a couple of times and her stool was dark, black and sticky. And her tummy pains got worse and worse.

My youngest daughter Min’s flu symptoms and cough had gotten deeper and chronic, however they were mostly worse during the nights. Her constipation has gotten worse, with bowel movements every 5-6 days with extreme difficulty. In the daytime, neither girls seemed to be ill and still had lots of energy. You wouldn’t have guessed that these 2 girls were under the weather. We must have visited our pediatrician at least 6 times in that 4 weeks for both girls. When the girls are sick, their behavior deteriorates and there’s lots of temper tantrums, meltdowns and clinginess.

To top it all off, it coincided with our nanny’s annual holiday back to her country. And it was school holidays too, so there was no respite for my husband and I on days when one of them were well enough to go to school.

After many types of natural, biomedical and mainstream treatments, neither the girls got better. Eventually the doctor treated Min for bronchitis, yet again. Both girls had bronchitis in June 2010, pneumonia in November 2010 and now bronchitis again. Min has a history of respiratory illnesses that gets worse and worse, so we have to be extra vigilant whenever she gets a cold, flu or cough. I won’t even go into the many types of medications it took; antibiotics, steroids, etc. However, it worked. Within 3 days, her cough reduced greatly and she recovered within 1 week. This is one of those times where modern medicine has come through for us.

Blowing into the silver bag

I was extremely proud of May, firstly the test was conducted in the lab room. A place she is terrified of because that’s where she usually gets her blood drawn. She remembers the place and was incredibly scared. But I promised her no blood test or needles this time, she just had to drink the “orange juice” and blow into a silver balloon.

Even though she was terrified of that room, she blew into the bag with no issues. Thank goodness for ABA therapy, before this she didn’t know how to blow out. But the “orange juice” took some time. As you know, she is still a picky eater and drinker. It was an unusual taste for her, and it took us a good twenty minutes of constant encouragement for her to drink the entire solution, which was probably just 1/4 cup. However, she managed to drink it all up and waited patiently afterwards. She liked blowing into the silver balloon. I was so proud of her.

On our next consult, the doctor reviewed all the test results with us. The occult blood stool test, bacteria and fungal stool tests all came back negative. This was especially good news as a positive occult blood in stool could have many medical implications. 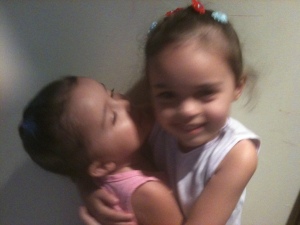 However, the urea breath test was positive for gastritis caused by Helicobacter pylori. It is a bacterial infection that causes gastritis, rather than the types of gastritis we usually hewr where it’s stress-induced or issues with stomach acid. Some doctors and patients choose not to treat Helicobactor pylori, however the doctor and I discussed the future implications. Even with treatment, the gastritis may recur within 3 years. But if left untreated, there are chances it might turn carcinogenic when she’s older.

There was no doubt in my mind that I wanted to treat it immediately, many of you know my stance on bad bacteria and the havoc they create in my girls. The treatment required 2 types of antibiotics for several weeks as well as the mandatory anti-fungal and mega-doses of probiotics that May needs whenever she’s on antibiotics.

With May’s sensitive taste buds and still some non-compliance with taking medication by syringe especially when the taste is strong, we struggled mightily. We tried just about every means possible to get her to take her antibiotics and stick to the protocol. In desperation, I even tried to mix it in real chocolate ice-cream, we even added M&Ms or crumbled Kit Kats on it! Casein and sugars be damned I thought, I’ll deal with it later. Yet May still rejected it, at most she’ll only eat half of it. So, even with extreme measures, we could never get her to take one complete dose.

However after 3 days, I had to make the extremely difficult decision to stop the course. There was no way we could have continued on like this for the next few weeks, as it was May could never finish an entire dose. 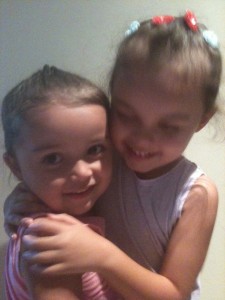 A big hug for the little sis

Several weeks back, I had made an appointment with my old classical homeopath Michelle Keats from Homeopathy Plus in Australia. I had decided to restart classical homeopathy rather than the sequential homeopathy / mixed methodology that Dr Beilby had provided in December last year. The earliest date she could give us was coincidentally on the 3rd day of May’s antibiotic protocol. What great timing!

During the 1.5 hour phone consult, we discussed May’s gastritis due to Helicobacter pylori. Michelle advised us that it’s not advisable to stop an antibiotics course midway, but I already knew that. However, I told her that I was willing to take the risk. We were that desperate. She knew of several remedies that can help such infections.

To date, May no longer complains of tummy pains and her bowel movements are back to normal. However, we are still looking for the ideal remedy to treat May’s core issues. But we have seen some nice results from classical homeopathy and continue to address their core issues.

Min has recovered from bronchitis. However, the strong antibiotics, steroids and other meds took a heavy toll on Min, it took some time before she was back to her usual cheerful active self. She is now on classical homeopathic remedy and we saw immediate improvements in her. However, that’s a story for another day.

So, April was a extremely challenging time for us, with 2 different major illnesses to battle, many trips to the hospital, 2 sick little girls, no nanny, school holidays as well as an increase in my Autism advocacy works due to April Autism Awareness Month campaigns, presentations to prepare and articles to write. So we breathe a sigh of relief now that it’s May. We look forward to a new illness free day and continue to strive to improve our daughters’ immune dysfunction and mitochondrial disorders.

Many of you asked me the same question, the answer is “Yes, our nanny came back” 🙂